Is it an Inch or a Mile?

But not all structures are so fortunate.  There is a rather famous tower in Italy that has had a bit of a rough go over the last 800 or so years.  In case you haven’t guessed, I am referring to the Leaning Tower of Pisa.  A few fun facts about the world-famous tower:

•    The city of Pisa got its name in 600 BC from a Greek word meaning “marshy land”.  Maybe not the best place to build a tower.  Makes me think of the 1975 classic, Monty Python and the Holy Grail, wherein Michael Palin’s King of Swamp Castle exclaims, “When I first came here, this was all swamp.  Everyone said I was daft to build a castle on a swamp, but I built it all the same, just to show them.  It sank into the swamp…”

•    The tower took almost 200 years to complete (1174 to 1372; completion dates vary).  Multiple wars and lack of funding, along with the tilt, caused the delays.  However, the delays were a blessing in disguise, as they allowed the tower to stabilize in between the various stages of construction.

•    The engineers tried to counteract the aesthetic effect of the tilt by constructing the floors on the leaning side slightly taller.  This actually caused the tower to lean more due to the added weight on the already sinking side.  The tower today has a slight curvature due to this proposed solution.

•    The tower continued to tilt about 2 millimeters per year until it was stabilized around the turn of the turn of the century.  There has been no measured movement since 2008. 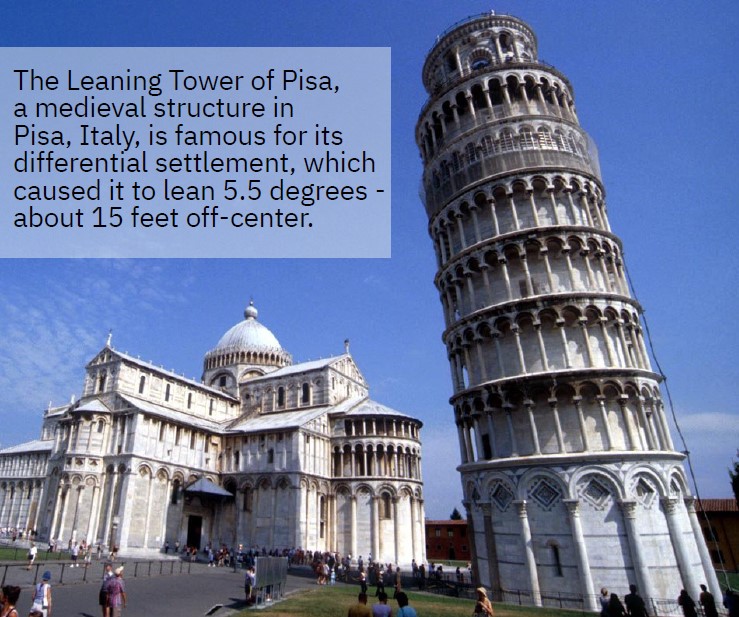 But why does the Leaning Tower of Pisa lean?  In the geotechnical world, the answer is simple -  the tower was built on excessively soft foundation soils (remember, Pisa means marshy land).  These soils could not support the weight of the structure, which began leaning after just the third story (of eight) was constructed.

Poor foundation soils have been and will continue to be a problem for engineers and developers worldwide.  Soft clays, loose sands, organic soils – all of these can add significant cost and time to a project.  Until recently, there were really only two ways to deal with poor soils, removal and replacement or deep foundations.

For those not familiar with the geotechnical terminology:

•    Removal and Replacement consists of simply “hogging” out poor soils and replacing it with better soils. Doesn’t get much simpler than that, or does it?  Certain site conditions can make this option impractical.  Poor soils can extend so deep as to make removal and replacement cost-prohibitive or difficult, even with modern equipment. Shallow groundwater can necessitate a dewatering program. Adjacent structures can require underpinning or sheeting and shoring. Environmentally impacted soils can greatly increase the cost of haul off and disposal. All these factors can make removal and replacement a less than favorable solution.

•    Deep Foundations employ the use of long concrete, steel, or wood elements to bypass poor soils and transfer the weight of the building super-structure into competent soils or bedrock.  This geotechnical solution provides excellent settlement control, particularly for heavily loaded structures. However, deep foundations are expensive (at least compared to other geotechnical solutions) and require structural slabs and pile caps designed to resist the shear and bending moments of the overlying structure. In addition, deep foundations generally require several large pieces of equipment on site, which can be problematic on small sites or sites with existing development.

So what does all this have to do with the title of this blog – “Is it an Inch or a Mile”?  That is a fair question.  To understand that, we need to look to the originator of the quote, Dr. Nathanial Fox (Developer of Geopier Foundation System).

“Up until now, a consulting geotechnical engineer had one primary question to answer on every design project that he does.  And that is - can this structure be supported on shallow foundations or does it need to go to deep foundations.  In otherwards, is it an inch or is it a mile?  Now he has another option – does it have to be deep foundations – or can it be intermediate foundations – less expensive and more practical.” – Dr. Fox

The Intermediate foundation option Dr. Fox is referring to is his brainchild, the Geopier Rammed Aggregate Pier (RAP).  These RAPs are a fast, cost-effective foundation solution that consist of drilling out or displacing poor soils and replacing them with dense columns of compacted aggregate.  They provide the best of both worlds between removal and replacement and deep foundations at a fraction of the cost.

It really came down to identifying an unmet need, and developing a marketable solution to provide value to the customer.  Dr. Fox saw an unmet need in the construction world – a foundation solution that wasn’t an inch (shallow spread footings), but also wasn’t a mile (deep foundations).  The Geopier RAP system he developed was an intermediate solution (a foot?) that was both cost effective and schedule friendly.  But don’t take my word for it – hear it directly from Dr. Fox.

And the rest is history!  Geopier has been capturing market share from removal and replacement and deep foundations for the past 25+ years.  A few interesting facts about Geopier:

And as we move into a new age of global issues (think climate change, energy shortages, etc…), what will be the next unmet need and who will step up to the plate to develop the optimal solution?  That is a discussion for another blog.
Share this page:

Is it an Inch or a Mile?